TMJ is an extremely painful jaw disorder caused by inflammation, strain, or misalignment of the temporomandibular joint. People who live with TMJ disorder suffer serious pain that negatively impacts their quality of life in a significant way. If you’ve had or have TMJ (technically named TMD), you know how debilitating it can be. To add to the pain, friends, and family who don’t have TMJ may not understand the severity and seriousness of the condition. Many patients also experience being shuffled from physician to dentist to chiropractor and back to a physician without receiving a solution to their pain.

We hear you. We understand. We can help. 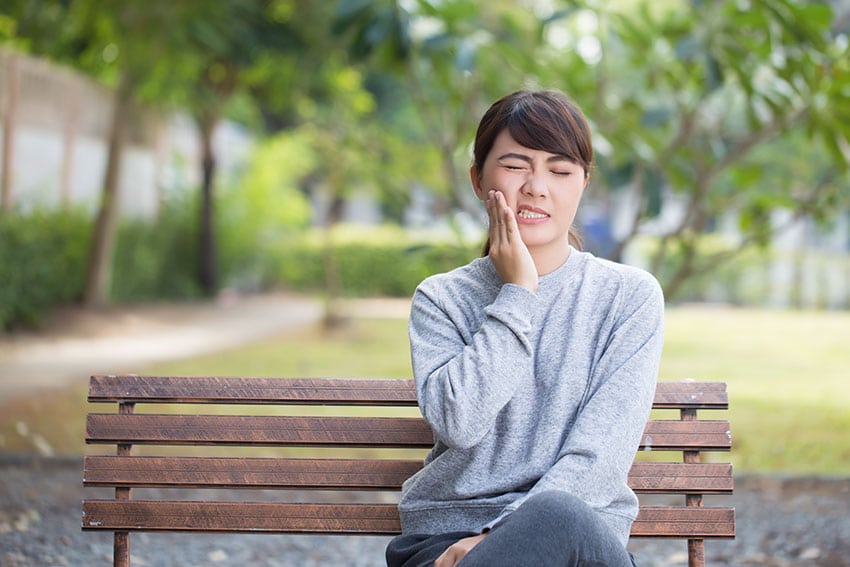 Your temporomandibular joint acts like a sliding hinge allowing your jaw to move so you can talk, chew, and yawn. Traditional dentistry depicts the jaw like a hinge but fails to include that it can slide forward and backward. Neuromuscular dentistry is a field of medicine that focuses on the correction of jaw misalignment and occlusion (the way your teeth come together). Neuromuscular dentists know how the jaw is supposed to function.

When you have TMJ the joint is imbalanced or unstable. Your body tries to compensate for this by over-correcting and the muscles that surround the joint become inflamed. This inflammation causes the pain you feel and a whole host of other consequences. People with TMJ often experience some or all of the following symptoms.

These symptoms can be so debilitating that TMJ can provoke a big disruption in your life. TMJ can affect your personal life with your family, your romantic relationships, your professional life, your social life, and even brief relationships with those who you don’t know well. Because of this, there can be big psychological impacts that go beyond jaw pain.

In 2020 the National Academy of Medicine released a report on the sigma of TMJ disorder and its impact on a patient’s life.

In the report, it’s said that the stigma of TMJ can come internally and externally. Internally, patients can have previously held beliefs that they don’t need TMJ treatment to get better, and externally, those around the TMJ patient could think that it’s not that bad and that the sufferer is exaggerating. The truth is, TMJ can impact the fundamentals of the human experience such as smiling, laughing, speaking, eating, and intimacy.

Many TMJ patients report that they feel their family, friends, and loved ones don’t believe them and that practitioners have assumed that the pain is imagined or exaggerated. Patients have experienced hostility from their professional colleagues and a lack of understanding from their friends and loved ones.

Inexperienced physicians, dentists, and chiropractors have also steered patients wrong. Patients have said they’ve left a doctor’s office feeling unclear about their next steps or unheard and misunderstood. This stigma can leave patients feeling degraded and without dignity. This loss of self-esteem causes patients great mental and physical stress, often only worsening their condition.

When choosing a dentist look for years of experience, continuing education courses, certifications and fellowships, testimonials, and ratings. Keeping in mind these six things will help you choose a dentist who can treat your TMJ. At SmileOn Dental Studio in St. Louis, we have an experienced and highly trained dentist who is ready to help you get your life back. Take a look at our testimonials and see for yourself.

Our neuromuscular dentist will start by talking with you about the symptoms you’re experiencing. We know that dentistry can sometimes be scary and anxiety-producing, that’s why we offer NuCalm as an option to keep you relaxed during your treatment. Next, we will use different types of advanced technology to diagnose your TMJ; including a TENS Unit, which sends small electrical pulses to the jaw muscles to get your jaw to relax. Then, Dr. Chris Hill and determine the optimal jaw position. After the correct jaw position is found, Dr. Hill will recommend treatment options. In many cases, this is an oral appliance that you wear at night. In other cases, he may recommend orthodontics or a full mouth reconstruction.

After TMJ treatment with Dr. Hill in St. Lewis, you can have your life back. No more dreading meeting new people because it hurts to smile and talk. No more avoiding your favorite foods because they’re too hard to chew. No more explaining away why you don’t want to attend a social engagement because you are in too much pain, depressed, or anxious. You can live a pain-free, depression-free, and anxiety-free life with TMJ treatment in St. Lewis.

Are you experiencing jaw pain or any of the other symptoms that may point to TMJ/TMD? Don’t wait to get treatment and don’t worry that you’re being overdramatic. At SmileOn Dental Studio, we understand your pain and we want to help. Call SmileOn today at (314) 678-7876 or schedule a consultation online. A life free of TMJ isn’t out of reach.